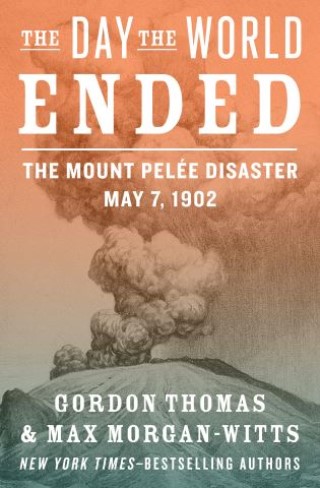 The Day the World Ended

The true story of a horrifying natural disaster—and the corruption that made it worse—by the New York Times–bestselling authors of Voyage of the Damned.

In late April 1902, Mount Pelée, a volcano on the Caribbean island Martinique, began to wake up. It emitted clouds of ash and smoke for two weeks until violently erupting on May 8. Over 30,000 residents of St. Pierre were killed; they burned to death under rivers of hot lava and suffocated under pounds of hot ash. Only three people managed to survive: a prisoner trapped in a dungeon-like jail cell, a man on the outskirts of town, and a young girl found floating unconscious in a boat days later.

So how did a town of thousands not heed the warnings of nature and local scientists, instead staying behind to perish in the onslaught of volcanic ash? Why did the newspapers publish articles assuring readers that the volcano was harmless? And why did the authorities refuse to allow the American Consul to contact Washington about the conditions? The answer lies in politics: With an election on the horizon, the political leaders of Martinique ignored the welfare of their people in order to consolidate the votes they needed to win.

A gripping and informative book on the disastrous effects of a natural disaster coupled with corruption, The Day the World Ended reveals the story of a city engulfed in flames and the political leaders that chose to kill their people rather than give up their political power.

Gordon Thomas:
Gordon Thomas is a political and investigative journalist and the author of fifty-three books, published in more than thirty countries and in dozens of languages. The total sales of his works exceed forty-five million copies.

He has been a widely syndicated foreign correspondent and was a writer and producer for three flagship BBC programs: Man Alive, Tomorrow’s World, and Horizon. He contributes regularly to Facta, a respected monthly Japanese news magazine. Thomas was the lead expert for a twelve-part series on international intelligence for Ian Punnett’s Coast to Coast, the most listened-to overnight radio broadcast in North America, with three million weekly listeners. He has recently appeared on Euronews (available in ten languages and three hundred million households) and Russia Today.

He has received numerous awards for his reporting, including an International Television Award and two Mark Twain Society Awards. Shipwreck won an Edgar Award.

Four of Thomas’s books—Voyage of the Damned, Ruin from the Air, The Day the Bubble Burst, and The Day Their World Ended—have been made into feature films starring such A-listers as Paul Newman, Billy Crystal, Robert Vaughn, and Jacqueline Bisset. The Day Guernica Died is currently under option.

Thomas’s most recent bestseller is Gideon’s Spies: Mossad’s Secret Warriors. Published in sixteen languages and forty countries, Gideon’s Spies is known throughout the world as the leading resource on Israeli intelligence. It was made into a major documentary for Channel 4 in Britain, which Thomas wrote and narrated, called The Spy Machine. The Observer called The Spy Machine a “clear” picture of Israeli intelligence operations, and the Times called it “impressive” and ”chilling.”