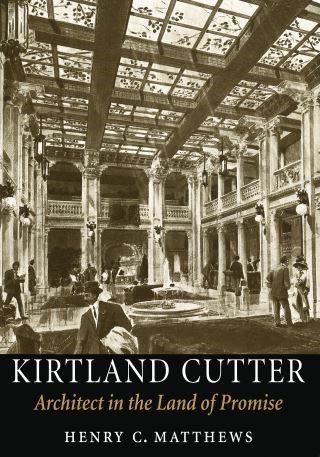 Architect in the Land of Promise

In the early years of the twentieth century, Spokane was singled out for praise in the West for the quality of its architecture and the impressive way it had rebuilt after the devastating fire of 1889. Major credit for the city's distinctive character was extended to Kirtland Kelsey Cutter for his "rare architectural force and genius for design." His remarkable career, stretching from the Gilded Age to the Great Depression, allows a fascinating study of the evolution of an eclectic form of architecture that was an inevitable response to rich regional and historical influences during a time of transition from frontier settlements to modern city.

Cutter's influence was felt beyond Spokane--in Seattle, other areas of Washington, and in Oregon, Idaho, and Montana. He was also responsible for buildings in the East and even for one in England. After financial problems ended his career in the Northwest, he began anew at age sixty-three in southern California, and worked there as an architect until his death in 1939 at age seventy-nine.

Henry Matthews presents a comprehensive study of the whole body of Cutter's work, with ample photographs and illustrations. The book is based on exhaustive research in both the Northwest and California, revealing the influences on Cutter and his associates, the processes at work in the design and construction of the buildings, and the relations between the architect and the many people who commissioned his work. Particularly useful to Matthews's research was a collection of 290 sets of drawings, as well as office accounts, letters, and books from Cutter's library--materials acquired by the Eastern Washington State Historical Society. He also was able to interview former assistants and clients, who provided valuable insights on the architect and the way Cutter worked. In addition, many of the architect's residences, hotels, clubs, and commercial buildings are still standing.

This book adds significantly to an understanding of Western urban and regional history. But Cutter's experimentation in many styles and the imaginative nature of his work make for a study that goes beyond regional limits and sheds light on national trends.