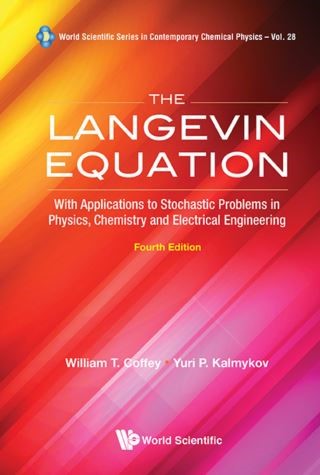 Langevin Equation, The: With Applications To Stochastic Problems In Physics, Chemistry And Electrical Engineering (Fourth Edition)

With Applications to Stochastic Problems in Physics, Chemistry and Electrical Engineering

Our original objective in writing this book was to demonstrate how the concept of the equation of motion of a Brownian particle — the Langevin equation or Newtonian-like evolution equation of the random phase space variables describing the motion — first formulated by Langevin in 1908 — so making him inter alia the founder of the subject of stochastic differential equations, may be extended to solve the nonlinear problems arising from the Brownian motion in a potential. Such problems appear under various guises in many diverse applications in physics, chemistry, biology, electrical engineering, etc. However, they have been invariably treated (following the original approach of Einstein and Smoluchowski) via the Fokker-Planck equation for the evolution of the probability density function in phase space. Thus the more simple direct dynamical approach of Langevin which we use and extend here, has been virtually ignored as far as the Brownian motion in a potential is concerned. In addition two other considerations have driven us to write this new edition of The Langevin Equation. First, more than five years have elapsed since the publication of the third edition and following many suggestions and comments of our colleagues and other interested readers, it became increasingly evident to us that the book should be revised in order to give a better presentation of the contents. In particular, several chapters appearing in the third edition have been rewritten so as to provide a more direct appeal to the particular community involved and at the same time to emphasize via a synergetic approach how seemingly unrelated physical problems all involving random noise may be described using virtually identical mathematical methods. Secondly, in that period many new and exciting developments have occurred in the application of the Langevin equation to Brownian motion. Consequently, in order to accommodate all these, a very large amount of new material has been added so as to present a comprehensive overview of the subject.