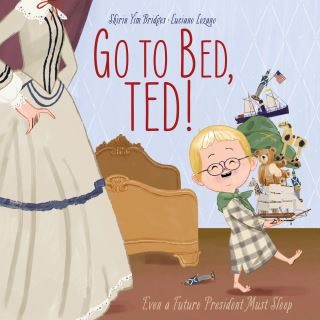 Even a Future President Must Sleep

Even the future president of the United States has to wash up, put his toys away, settle down, and go to bed

Go to bed, Ted! It’s time for little Theodore Roosevelt, the future president, to take a bath, quit playing, and put away his toys. Time to stop rough-riding the bed, keep his nightclothes on, and dream big. It’s tough going to bed every night—for presidents and kids alike.

Shirin Yim Bridges:
Shirin Yim Bridges is the award-winning author of Ruby’s Wish, which won the Ezra Jack Keats Award, The Umbrella Queen, and Mary Wrightly, So Politely. In addition, she founded and is the former publisher of Goosebottom Books, which published The Thinking Girl’s Treasury of Dastardly Dames and The Thinking Girl’s Treasury of Real Princesses. Go to Bed, Ted! is the sequel to Get Up, Elizabeth!, also published by Cameron Kids. She lives in the Bay Area. Luciano Lozano was born in southern Spain and currently lives and works in Barcelona. He has illustrated several picture books both here and abroad. Go to Bed, Ted! is his first for Cameron Kids.