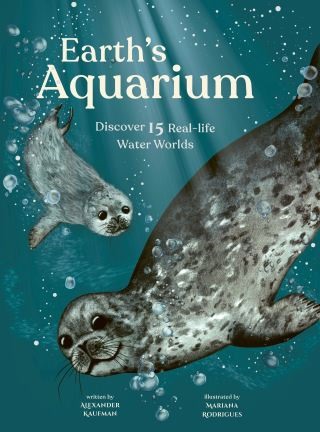 Discover the wonder of 15 real–life aquatic habitats all around the world, from mysterious deepwater vents to majestic coral reefs, teeming with life.
Award–winning environmental writer Alexander C. Kaufman takes us on a tour of rainforest waterways, oyster reefs, seagrass meadows, and more, then introduces the incredible species that live there, each specially adapted to their unique ecosystems.
The following habitats are featured in this book:

Alexander C. Kaufman:
Alexander C. Kaufman is an award–winning senior reporter at HuffPost, where he writes about climate change, environmental policy, and politics. A Long Island native, he lives in Queens, New York with Amanda Luz Henning Santiago and a cat named Ashitaka. Mariana Rodrigues creates rich and magical illustrations which are inspired by her love of nature and its surreal forms, real and imagined. She has earned clients in the form of Bombay Sapphire, Absolut, Nespresso, and Adobe. She lives in London.