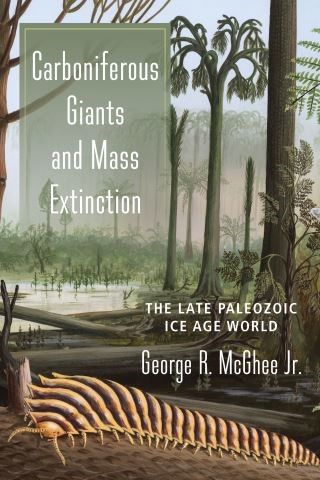 Picture a world of dog-sized scorpions and millipedes as long as a car; tropical rainforests with trees towering over 150 feet into the sky and a giant polar continent five times larger than Antarctica. That world was not imaginary; it was the earth more than 300 million years ago in the Carboniferous period of the Paleozoic era. In Carboniferous Giants and Mass Extinction, George R. McGhee Jr. explores that ancient world, explaining its origins; its downfall in the end-Permian mass extinction, the greatest biodiversity crisis to occur since the evolution of animal life on Earth; and how its legacies still affect us today.

McGhee investigates the consequences of the Late Paleozoic ice age in this comprehensive portrait of the effects of ancient climate change on global ecology. Carboniferous Giants and Mass Extinction examines the climatic conditions that allowed for the evolution of gigantic animals and the formation of the largest tropical rainforests ever to exist, which in time turned into the coal that made the industrial revolution possible—and fuels the engine of contemporary anthropogenic climate change. Exploring the strange and fascinating flora and fauna of the Late Paleozoic ice age world, McGhee focuses his analysis on the forces that brought this world to an abrupt and violent end. Synthesizing decades of research and new discoveries, this comprehensive book provides a wealth of insights into past and present extinction events and climate change.

George R. McGhee Jr.: George R. McGhee Jr. is Distinguished Professor of Paleobiology at Rutgers University and a fellow of the Konrad Lorenz Institute for Evolution and Cognition Research in Klosterneuburg, Austria. He has held research positions at the University of Tubingen, the Field Museum of Natural History, and the American Museum of Natural History. His books include The Late Devonian Mass Extinction: The Frasnian/Famennian Crisis (1996); Theoretical Morphology: The Concept and Its Applications (1999); and When the Invasion of Land Failed: The Legacy of the Devonian Extinctions (2013), from Columbia University Press.