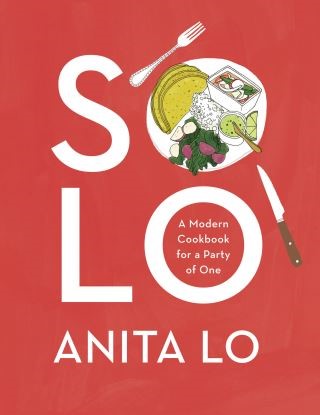 A Modern Cookbook for a Party of One

EATER’S COOKBOOK OF THE YEAR

From the Michelin-starred chef and Iron Chef America and Top Chef Masters contestant—a hilarious, self-deprecating, gorgeous new cookbook—the ultimate guide to cooking for one. With four-color illustrations by Julia Rothman throughout.

The life of a chef can be a lonely one, with odd hours and late-night meals. But as a result, Anita Lo believes that cooking and dining for one can, and should, be blissful and empowering. In Solo, she gives us a guide to self-love through the best means possible—delicious food—in 101 accessible, contemporary, and sophisticated recipes that serve one.

Drawn from her childhood, her years spent cooking around the world, and her extensive travels, these are globally inspired dishes from Lo’s own repertoire that cater to the home table. Think Steamed Seabass with Shiitakes; Smoky Eggplant and Scallion Frittata; Duck Bolognese; Chicken Pho; Slow Cooker Shortrib with Caramelized Endive; Broccoli Stem Slaw; Chicken Tagine with Couscous; and Peanut Butter Chocolate Pie—even a New England clambake for one. (Pssst! Want to share? Don’t worry, these recipes are easily multiplied!)

Anita Lo: ANITA LO is an acclaimed chef who worked at Bouley and Chanterelle before opening the Michelin-starred restaurant annisa in the heart of Manhattan’s Greenwich Village in 2000, which she ran until it closed in 2017. Food & Wine named her one of ten Best New Chefs in America, and The Village Voice proclaimed her Best New Restaurant Chef. She has appeared on Top Chef Masters, Iron Chef America, and Chopped; in 2015, she became the first female guest chef to cook at the White House. She lives in New York City and on Long Island.