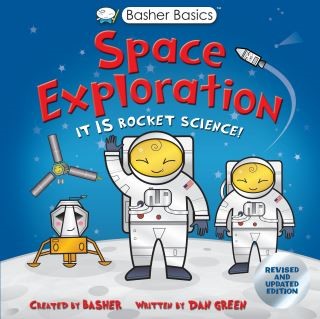 From the best-selling and compelling Basher, comes a book that shines its light into out-of-this-world beings who make the universe tick.

Learn about the amazing research that is revolutionizing space exploration, from the pioneering space crafts and equipment known as 'Space Aces' that have been used to delve into deep-space exploration to the scientists known as 'The Outerplanetary Mob' that have not only taken voyages to space and back but have contributed to our understanding of the universe. Space Exploration is a compelling guide to developments at the very forefront of science – a must-read for anyone wishing to understand, and engage with, modern space.

Simon Basher: Artist and designer Simon Basher has fun playing in the world of contemporary character design. Inspired by a love of simple line work and a rich color palette, his characters fill the gap between edgy manga and the cuteness of Hello Kitty. He lives in England.