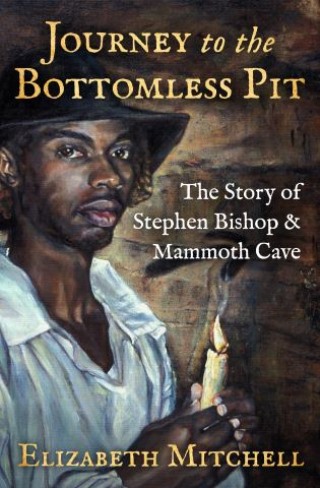 Journey to the Bottomless Pit

The thrilling adventures of a slave who became known worldwide for his explorations of Mammoth Cave.

If you toured Mammoth Cave in Kentucky in the year 1838, you would have been led by candlelight through dark, winding tunnels to the edge of a terrifying bottomless pit. Your guide would have been seventeen-year-old Stephen Bishop, an African American slave who became known around the world for his knowledge of Mammoth Cave.

Bishop needed bravery, intelligence, and curiosity to explore the vast cavern. Using only a lantern, rope, and other basic caving equipment, he found a way to cross the bottomless pit and discover many more miles of incredible grottoes and tunnels. For the rest of his life he guided visitors through the cave, showing them how to stoop, bend, and crawl through passageways that were sometimes far from the traditional tour route.

Based on the narratives of those who toured the cave with him, Journey to the Bottomless Pit is the first book for young readers ever written about Stephen Bishop.

Elizabeth Mitchell: ELIZABETH MITCHELL was raised in Omaha, Nebraska, but her grandparents lived in Louisville, Kentucky, and she visited them frequently on summer vacation. During one trip they took her to Mammoth Cave. Many years later, Mitchell took her son to see the cave. There she noticed the brief mention in a park service brochure of a cave guide named Stephen Bishop. Captivated by the few details it offered, she began researching his life for a book. She read newspaper articles about Bishop as well as firsthand reports written in the 1840s and 1950s. Modern-day cave guides and the official Mammoth Cave historian also contributed information. Mitchell is an award-winning science fiction editor who has worked for publishers such as Del Rey, a division of Random House; Bantam Books; Open Road Integrated Media, and more. She and her family live in Brooklyn, New York.

Kelynn Z. Alder is of Mexican American heritage and grew up with a family that lived in several countries and traveled extensively. At a young age, she learned to appreciate a wide range of the world’s living cultures and became fascinated by peoples’ diverse backgrounds. Portraits of everyday people from all corners of the world, but most especially Mexico remain her favorite subject matter. This, combined with the need to draw and paint, developed into a love of portraiture. Alder defines herself as a “visual essayist with a wanderlust,” because she follows traditional expeditionary methods of painting in the field, combined with work in the studio. Her work has been commissioned by such notable publications as the New Yorker, Time Magazine, and Australian Geographic. She currently resides on the north shore of Long Island with her husband, two children, and two “nearly human” Australian Shepherds. Visit her website at kelynnalder.com.