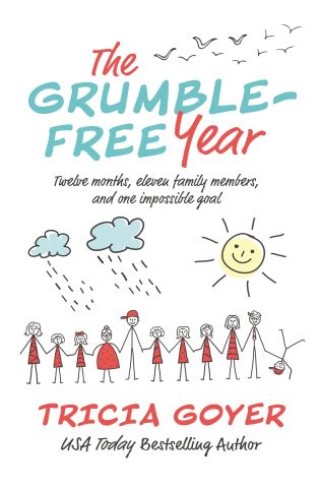 USA Today bestselling author Tricia Goyer and her family of eleven embark on a yearlong quest to eliminate grumbling from their home and discover a healthier, more thankful approach to life together.

The Goyer home--with two parents, eight kids, and one eighty-eight-year-old grandmother with dementia--is never without noise, mess, activity, and, often, complaining. And it's not just the kids grumbling. After adding seven children in less than six years through adoption, the Goyer family decided to move out of survival-mode and into unity- and growth-mode. They decided to tackle the impossible: a grumble-free year.

With grade-schoolers, teenagers, and a grandmother who believes children should be seen and not heard, plenty of room exists for flunking the challenge. Add to that seven children being homeschooled together in close quarters, and what could possibly go awry?

In The Grumble-Free Year, the Goyers invite readers into their journey as they go complaint-free and discover what it looks like to develop hearts of gratitude. They share their plans, successes, failures, and all the lessons they learn along the way, offering real-life action steps based in scripture so that readers get not just a front-row seat to the action but also an opportunity to take the challenge themselves and uncover hearts that are truly thankful.

A USA Today bestselling author, Tricia Goyer has published seventy-five books to date, written more than five hundred articles appearing in national publications, and is on the blogging team at TheBetterMom.com and other homeschooling and Christian sites. She is a two-time Carol Award winner and a Christy and ECPA Award Finalist and regularly receives starred reviews in the Romantic Times and Publishers Weekly.