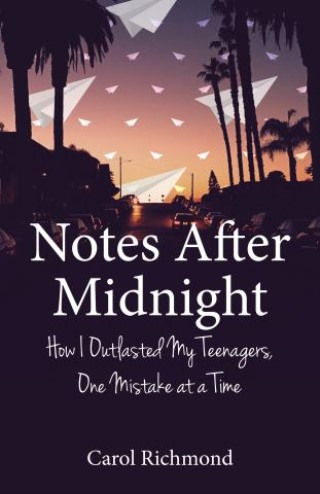 How I Outlasted My Teenagers, One Mistake at a Time

When thirty-five-year-old Carol Richmond decides to end her seventeen-year marriage, she has no idea what’s in store. Within the first year of the divorce, her ex-husband abandons his children and ignores the court’s orders to pay child support, and despite working sixteen hours a day and seven days a week, Richmond cannot make ends meet. She is forced to sell her home and hawk her jewelry in order to keep her family fed and housed, and more often than not she relies on hired women to kiss her children goodnight and dry their tears.
In the decade to follow, Carol’s growing children struggle with individual complexities. One son attempts suicide; another utterly fails academically; and her daughter is sexually abused by a trusted acquaintance. Yet Carol and her children endure—because they must.
Haunting yet full of humor and self-effacing wisdom, Notes After Midnight is a story of the invisible binding thread connecting each of us to one another—the thread that helps us find our way along even the most difficult of paths.

Carol Richmond: Though born in St. Joseph, Michigan, a beach town on Lake Michigan, Carol Richmond spent years of winters bouncing between Florida, Louisiana, Texas, and Mississippi. She settled in California and lived forty years on the central coast of California until her husband’s early retirement precipitated the move to a farm, purchased in 2005, on an island in the middle of the Pacific Ocean. Richmond now divides her time between the farm and the Monterey peninsula. The island serves as a creative respite, cooking and baking retreat, and writing solitude; the Mainland madness feeds her joy imbuing children with a love of ballet and theatre. She continues to nurture her first passion, the performing arts, as the director of a business with a sixty-five-year history of excellence. The three children portrayed in this memoir live as far away from her as possible yet are currently all speaking to each other . . . for now.