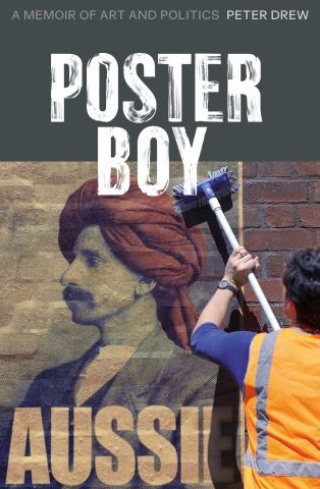 A Memoir of Art and Politics

When you’re sneaking around the city at night you feel like a kid again. The seriousness of the world is unmasked as a series of facades, dead objects just waiting to be painted. I was immediately hooked. Out on the street I could say anything I wanted. So what did I want to say?

Peter Drew’s posters are a familiar sight across Australia – his ‘Real Australians Say Welcome’ and ‘Aussie’ campaigns took on lives of their own, attaining cult status and starting conversations all over the country. But who made them, and why?

In this irresistible and unexpected memoir, Peter Drew searches for the answers to these questions. He traces the links between his creative and personal lives, and discovers surprising parallels between Australia’s dark, unacknowledged past and the unspoken conflict at the core of his own family.

Packed full of Peter Drew’s memorable images, Poster Boy is an intelligent, funny and brutally honest dive into the stew of individual, family and national identity. It’s about politics and art, and why we need them both. And it’s about making a mark.

‘Peter Drew’s work changes how we see our streets and country, as well as activism and art. Be warned: This galvanising book might propel you to start a movement yourself.’ —Benjamin Law

'An unflinching look at modern Australia, Poster Boy is a tale literally told from the streets. It is a stark story where the villains blend in with those devoted to pushing for change. This book floored me.' —Osher Günsberg

‘To read Poster Boy is to experience the life-enriching idea that one person can make real change. Then wait for the minute, the day, the week, when the afterglow of his story works its magic on your own simple deeds. From little things, big things truly grow.’ —Megan Morton

‘An insightful look into the life and mind of one of Australia's most progressive and forthright artists of our generation.’ —Nick Mitzevich, director of the National Gallery of Australia

Peter Drew: Peter Drew was born in 1983 in Adelaide. He holds a master’s degree from the Glasgow School of Art. His work has been exhibited at the Art Gallery of South Australia and the National Gallery of Australia, though his most prominent art is installed on city streets.