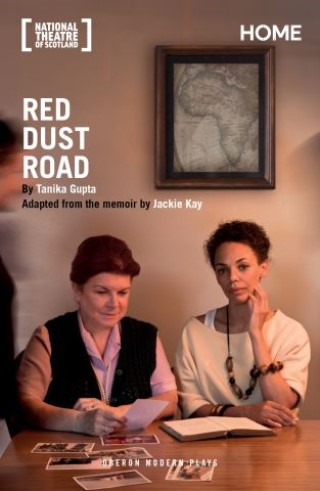 Growing up in 70s Scotland as the adopted mixed raced child of a Communist couple, young Jackie blossoms into an outspoken, talented poet. Then she decides to find her birth parents… Based on the soul-searching memoir by Scots Makar Jackie Kay, Red Dust Road takes you on a journey from Nairn to Lagos, full of heart, humour and deep emotions. Discover how we are shaped by the folk songs we hear as much as by the cells in our bodies.

Tanika Gupta: Tanika Gupta has written for theatre, radio, film and television. Aside from the works published by Oberon, her stage plays include Voices On The Wind (NT Studio), Skeleton (Soho Theatre), On The Couch With Enoch (Red Room - BAC) and The Waiting Room (NT) which won the John Whiting Award. She has also translated Brecht's The Good Woman of Setzuan for the National Theatre Education Touring and written plays for Theatre Royal Stratford East's Young Actor's Company Brood and Squid. Tanika is an Honorary Fellow at Rose Bruford College and was awarded an MBE in the Queen's Birthday Honours List in 2008 for Services to Drama.|||Jackie Kay was born and brought up in Scotland. She is the author of – among other books – The Adoption Papers, which won the Forward Prize, Red Dust Road, winner of the Scottish Book of the Year Award, Trumpet, and the Costa shortlisted Fiere. She is Chancellor of the University of Salford and Professor of Creative Writing at Newcastle University. She has served as Scots Makar, the National Poet for Scotland, since March 2016.