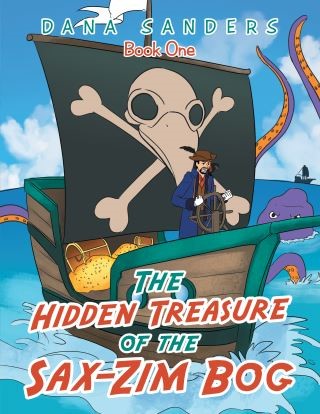 The Hidden Treasure of the Sax-Zim Bog

Leo and his little sister, Lucy, are going on a hiking adventure with their Grandma Dana and her mini dachshund, Tilly Lu, along the Saint Louis River. They’re excited to play “I spy” and see what treasures they can find. When Leo spots an old bottle floating in the river, they pull it out and discover that it contains a map and three stones, each with a special word. The map is full of hints to directing the way to the hidden treasure of the Sax-Zim Bog. Grandma Dana tells Leo and Lucy the story behind the Sax-Zim Bog, which was once a raging sea home to many mystical creatures, mermaids, and pirates. The most feared pirate was Captain Copper Ravenoski, and he set out to find a treasure hidden by an enchantress—the very treasure described by the map. Now Grandma Dana, Tilly Lu, and the kids have a chance to take a magical journey and find that treasure themselves. But they’ll have to face many dangers and challenges along the way. In this children’s tale, a grandmother, her dog, and her two grandchildren set out on a hike one day and stumble into an adventure in search of a secret treasure.

Dana Sanders: Dana Sanders has lived in northern Minnesota her entire life. She has worked in the health care industry for the past eighteen years in various leadership and educational positions. She has also played an instrumental role in advocating for diversity and inclusion in the workplace and communities and is the author of numerous human interest articles. She and her husband, Jeff, have a blended family of five daughters, a son-in-law, and two grandchildren.