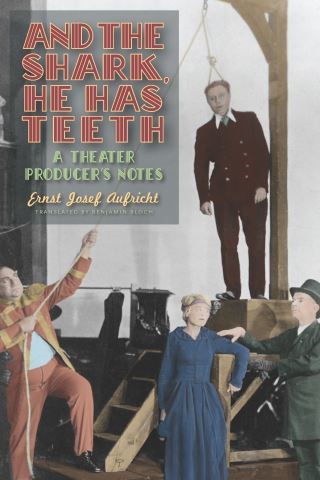 And the Shark, He Has Teeth

This is the first English translation of the memoirs of the great German-Jewish theater producer Ernst Josef Aufricht (in German 1966, rpt. 1998). The title alludes to Brecht and Weill's Threepenny Opera, the premiere of which was produced by Aufricht at his Theater am Schiffbauerdamm in Berlin in 1928, launching Brecht and Weill to worldwide fame.
Aufricht's book is most notable for its insider's account of the Berlin theater scene from the great days of the late 1920s and early 30s. Its range, however, from school years and the military to his time as an actor and then producer, the rise of the Nazis, and finally his long years of exile in France and America, gives the picture of a complex individual with a talent for survival and a winningly understated sense of humor.
The book will be of interest to an academic audience, but its reflections on a period of momentous artistic and political events will expand its appeal to a wider group: those interested in twentieth-century German history, music and theater history, as well as the general reader. A selection of photographs, some rare and many showing Aufricht's famous productions, enhances this English edition.

Benjamin Bloch is a clinical psychologist who studied German and English Literature at Oberlin College. Marc Silberman is Emeritus Professor of German at the University of Wisconsin.