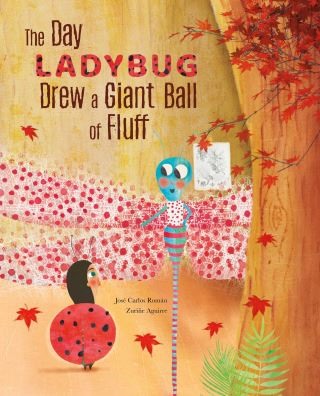 The Day Ladybug Drew a Giant Ball of Fluff

Everybody tells Ladybug her painting is not an elephant, but a giant ball of fluff. But… is it? A pleasantly colorful book, printed in stone paper, that invites readers to be imaginative and creative.

In school, the forest children had fun discovering the names of distant jungles, jumping around in the schoolyard, learning new songs. Miss Dragonfly asked their students to draw an elephant as homework. Ladybug’s friends Snail, Firefly and other colleagues were the first to show their masterpiece. Ladybug surprised everyone by drawing a giant ball of fluff.

There was no sign of the pachyderm! All the forest animals were worried: why would she have drawn something like that? Miss Dragonfly couldn’t believe it, so she warned Ladybug’s parents. It was not like her to do such thing… Who knows! Maybe she needed an ear exam… People in the forest started gossiping, but she could not be any healthier! Soon enough, Ladybug made it clear that perhaps they were wrong prejudging her creativity.

Read the first pages of The Day Ladybug Drew a Giant Ball of Fluff here below:

José Carlos Román García was born in Jerez de la Frontera, Spain. After graduating in Education and later in Pedagogy, he has for more than 20 years dedicated himself in body and soul to his great passion: being a nursery teacher. His work gradually approached him the wonderful world of children's literature. A tireless reader of children's books and in continuous search for meaningful titles to take to the classroom to delight the little ones, little by little his interest in writing stories for children began to awaken and in 2016 he began his career in the publishing world with the publication of his first picture book.

The award winning illustrator Zuriñe Aguirre is a restless creator. She was born in Vitoria, Spain, among wax crayons, tempera and colored pencils, where she took a Degree in Decoration. Years later she moved to France where she studied for a Diploma in Information and Communication Technologies at the Toulouse Le Mirail University. She never gave up drawing and 13 years ago decided to devote herself to her art. Her work is full of lights and shadow, along with colors that convey joy and serenity. In love with the pattern design that applies to each illustration. She has worked for publishers from Spain, England, South Korea, New Zealand and USA. In 2016 she was awarded gold metal for The Best Illustrations for Poetry at BookILL Fest, Serbia, and she was nominated for 3 consecutive years at Sharjah International Book Fair, United Arab Emirates. She was a finalist in the Euskadi Literary Awards and participant in several collective exhibitions.