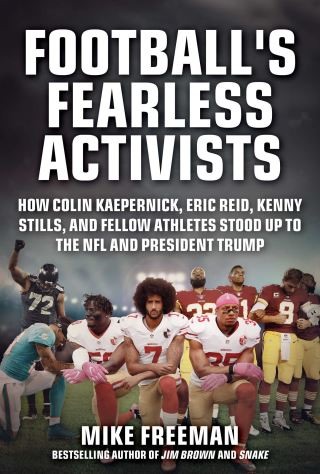 How Colin Kaepernick, Eric Reid, Kenny Stills, and Fellow Athletes Stood Up to the NFL and President Trump

For the first time, here is the full story of the NFL player protests that rocked a nation and turned our country upside down. This is the players' side, one that has largely been ignored by the media.

On September 1, 2016, Colin Kaepernick took a knee before a preseason game. Little did he, nor anyone else, know the ramifications from that decision. Since being exiled from the National Football League, Kaepernick has stood strong against all those who have attacked him. He and others who took a knee against racial inequality and police brutality have been ridiculed, mocked, threatened, and some have even lost their jobs. They have feared for their safety and that of their loved ones.

But what made Kaepernick kneel, and the entire country turn a silent protest into a national pandemic? One person: President Donald Trump.

For the first time, veteran journalist Mike Freeman sits down with those directly involved in the protests—the players—to find out how things really went down. Readers will learn why they decided to protest, how racism and the murdering of innocent men of color directly affected them, how the politics of protest affected their professional and personal lives, and if anything has even changed for the better.

Including interviews with Colin Kaepernick, Eric Reid, Kenny Stills, Michael Bennett, Richard Sherman, and numerous others, see first-hand how the media, President Trump, and the National Football League took a peaceful message for change and turned it on its head. They changed the narrative, accusing these men of being “anti-America,” “anti-military,” and “disrespecting the flag.”

In Football’s Fearless Activists, Freeman offers an opportunity to understand what these protests meant to the players, and how the hatred from the media, President, NFL owners, and some Americans was not only unwarranted, but anti-American.

Mike Freeman: Mike Freeman is a veteran sports reporter with more than 25 years of experience covering the NFL. Currently the Sports, Race and Inequality Editor at USA Today, he was written for numerous outlets, including the Washington Post, New York Times, Bleacher Report, Boston Globe, CBSSports.com, and Dallas Morning News. Freeman is the author or contributor to ten books, including Jim Brown: The Fierce Life of an American Hero, You Negotiate Like a Girl: Reflections on a Career in the National Football League (with former Raiders executive Amy Trask), and Snake: The Legendary Life of Ken Stabler.