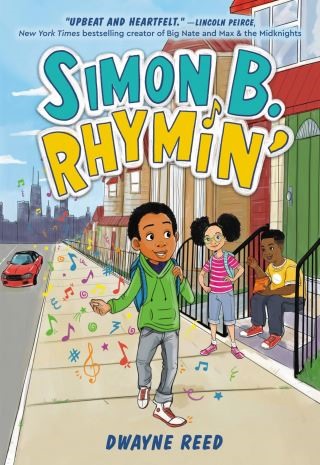 A humorous and heartwarming bounce-to-the-beat underdog story about a young rapper whose rhymes help bring his community together, from America's favorite rapping teacher.

As featured on Good Morning America!

Eleven-year-old Simon Barnes dreams of becoming a world-famous rapper that everyone calls Notorious D.O.G. But for now, he's just a Chicago fifth grader who's small for his age and afraid to use his voice.

Simon prefers to lay low at school and at home, even though he's constantly spitting rhymes in his head. But when his new teacher assigns the class an oral presentation on something that affects their community, Simon must face his fears.

With some help from an unexpected ally and his neighborhood crew, will Simon gain the confidence to rap his way to an A and prove that one kid can make a difference in his 'hood?

Dwayne Reed is a Chicago teacher, whose viral back-to-school music video "Welcome to the 4th Grade" took the internet by storm. His debut novel, Simon B. Rhymin' , inspires young readers everywhere to use their voice to create change within their communities.

Dwayne Reed: Dwayne Reed is America's favorite rapping teacher from Chicago. In 2016, the music video for his hit song, "Welcome to the 4th Grade," went viral and has since been viewed nearly two million times on YouTube. When he's not writing, rapping, or teaching, Dwayne can be found presenting at educator conferences across the U.S., or loving on his beautiful wife, Simoné, and their son, Chase.