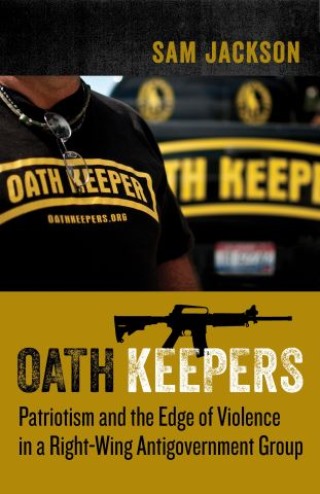 Since 2008, the American patriot/militia movement—right-wing antigovernment groups who portray themselves as fighting encroaching tyranny—has grown exponentially. Oath Keepers is among the most visible and vocal of these organizations. Formed in 2009, Oath Keepers gained notoriety for its involvement in the Bundy Ranch standoff of 2014 and the Malheur Refuge occupation of 2016. The group gives voice to a recurrent form of American politics: virulent distrust of the government combined with a valorization of violence.

Sam Jackson takes readers inside the world of the most prominent antigovernment group in the United States, examining its extensive online presence to discover how it builds support for its political goals and actions. Through an extensive textual analysis of the group’s publications, Jackson explores how Oath Keepers draws on core American political values and pivotal historical moments of conflict and crisis from the Revolutionary War to Waco to Hurricane Katrina to cast its adherents as defenders of liberty. He details how Oath Keepers makes sense of the contemporary United States, how it provides members with models of political behavior, and how it lobbies the wider American public to join the group. The first book-length investigation of the contemporary patriot/militia movement, Oath Keepers sheds new light on what animates groups that pose a growing threat to American security and political culture.

Sam Jackson: Sam Jackson is assistant Professor in the College of Emergency Preparedness, Homeland Security, and Cybersecurity at the University at Albany. He has published in Terrorism and Political Violence, among others.