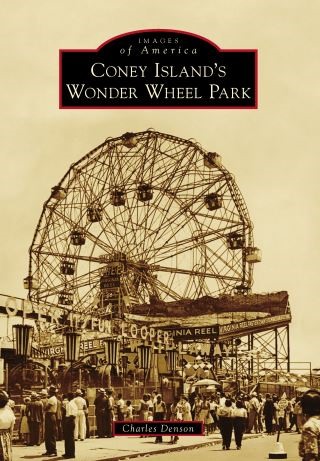 The venerable Wonder Wheel, Coney Island's oldest and greatest attraction, has dominated the Coney Island skyline for more than a century. Towering over an ephemeral amusement zone long plagued by fires, floods, and ill-conceived urban renewal schemes, the magnificent steel machine has proved to be the ultimate survivor. The ride boasts impressive statistics. A combination of roller coaster and Ferris wheel, the 150-foot-tall structure weighs 200 tons, has 16 swinging cars and 8 stationary cars, and can carry 144 riders. More than 40 million passengers have taken a ride on the wheel since it was built in 1920, and during that time, it has maintained a perfect safety record. The ride is also a monument to immigrant initiative. Charles Hermann, the ride's designer, was Romanian; the original owner, Herman Garms, was German; and Denos Vourderis, who purchased and lovingly restored the aging landmark in 1983, was Greek. An official New York City landmark, the Wonder Wheel is now owned and operated by three generations of the Vourderis family as the centerpiece of their Deno's Wonder Wheel Park. The enduring saga of this iconic ride, and the family that saved it, provide a captivating chapter of Coney Island's history.