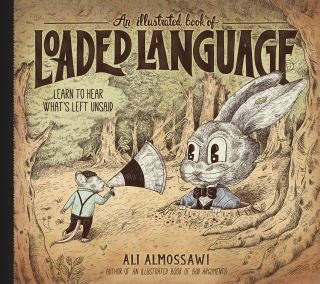 An Illustrated Book of Loaded Language

“This is a book for every thinking person, the perfect antidote to today’s culture wars.”—Hope Jahren

The creators of An Illustrated Book of Bad Arguments return with this desperately timely guide to how words can trick us. Learn to “hear” hidden bias, slant, and spin—from an irresistible cast of woodland creatures!

Public discourse? More like public discord. The battle cries of our culture wars are rife with “loaded language”—be it bias, slant, or spin. But listen closely, or you’ll miss what Ali Almossawi finds more frightening still: words that erase accountability, history, even identity through what they leave unsaid.

Speaking as wise old Mr. Rabbit, Almossawi leads us through a dark forest of rhetoric—aided by Orwell, Baldwin, and a squee-worthy cast of wide-eyed woodland creatures. Here, passive voice can pardon wrongdoers, statistics may be a smokescreen, gaslighting entraps the downtrodden, and irrelevant adjectives cement stereotypes. Emperor Squirrel isn’t naked; he has a clothes-free sartorial style. Mouse’s roof becomes flattened (Elephant’s foot just happens to be there at the time). And when keen-eyed Owl claims a foreign shore, he seems to be overlooking someone . . .

Fans of Almossawi’s An Illustrated Book of Bad Arguments couldn’t ask for a better primer on the less logical ways that words can trick us. It takes a long pair of ears to hear what’s left unsaid—but when you’re a rabbit in a badger world, listening makes all the difference.