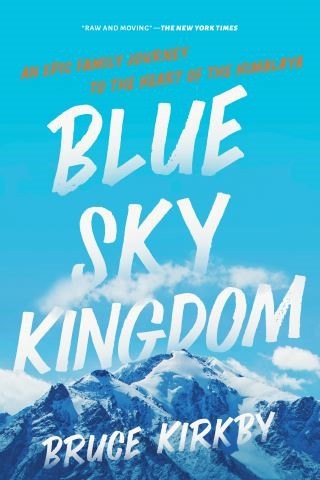 A Family Journey to the Heart of the Himalaya

One morning at breakfast, while gawking at his phone and feeling increasingly disconnected from family and everything else of importance in his world, it strikes writer Bruce Kirkby: this isn’t how he wants to live.

Within days, plans begin to take shape. Bruce, his wife Christine, and their two children—seven-year-old Bodi and three-year-old Taj—will cross the Pacific by container ship, then travel onward through South Korea, China, India and Nepal aboard bus, riverboat and train, eventually traversing the Himalaya by foot. Their destination: a thousand-year-old Buddhist monastery in the remote Zanskar valley, one of the last places where Tibetan Buddhism is still practised freely in its original setting.

Taken into the mud-brick home of a senior lama, Tsering Wangyal, the family spends the summer absorbed by monastery life. In this refuge, where ancient traditions intersect with the modern world, Bruce discovers ways to slow down, to observe and listen, and ultimately, to better understand his son on the autism spectrum—to surrender all expectations and connect with Bodi exactly as he is.

Recounted with wit and humility, Blue Sky Kingdom is an engaging travel memoir as well as a thoughtful exploration of modern distraction, the loss of ancient wisdom, and the challenges and rewards of intercultural friendships.

Bruce Kirkby is a wilderness writer and adventure photographer recognized for connecting wild places with contemporary issues. With journeys spanning more than eighty countries and thirty years, Kirkby’s accomplishments include the first modern crossing of Arabia’s Empty Quarter by camel, a descent of Ethiopia’s Blue Nile Gorge by raft, a sea kayak traverse of Borneo’s northern coast and a coast-to-coast Icelandic trek. A columnist for The Globe and Mail, author of two bestselling books and winner of multiple National Magazine Awards, Kirkby has also written for the New York Times, Outside magazine and Canadian Geographic. He makes his home in Kimberley, BC.