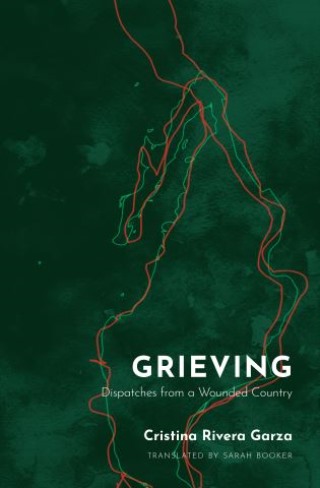 Dispatches from a Wounded Country

By one of Mexico's greatest contemporary writers, this investigation into state violence and mourning weaves together personal essay and literary theory, giving voice to the political experience of collective pain.

Grieving is a hybrid collection of short crónicas, journalism, and personal essays on systemic violence in contemporary Mexico and along the US-Mexico border. Drawing together literary theory and historical analysis, she outlines how neoliberalism, corruption, and drug trafficking—culminating in the misnamed “war on drugs”—has shaped her country. Working from and against this political context, Cristina Rivera Garza posits that collective grief is an act of resistance against state violence, and that writing is a powerful mode of seeking social justice and embodying resilience.

She states: “As we write, as we work with language—the humblest and most powerful force available to us—we activate the potential of words, phrases, sentences. Writing as we grieve, grieving as we write: a practice able to create refuge from the open. Writing with others. Grieving like someone who takes refuge from the open. Grieving, which is always a radically different mode of writing.”

Cristina Rivera Garza is an award-winning author, translator, and critic. Her books, originally written in Spanish, have been translated into multiple languages. She is the recipient of the Roger Caillois Award for Latin American Literature (2013), the Anna Seghers-Preis (2005), and the only two-time winner of the International Sor Juana Inés de la Cruz Prize (2001; 2009). In 2020, Rivera Garza was awarded a MacArthur Foundation Grant. She received her PhD in 2012 in Latin American history from the University of Houston, where she is currently Distinguished Professor in Hispanic Studies.