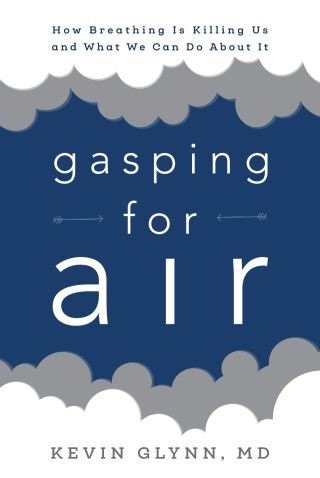 Breathing is a continuous battle between our need for oxygen and forces in nature that attack our lungs. Three hundred thousand Americans will die of respiratory diseases this year. Gasping for Air is the dramatic story of how infections, toxins, carcinogens, and air pollution strike against one of our basic body functions. The book also describes how we come into the struggle with diseases like asthma, cystic fibrosis, and sleep apnea, which make us vulnerable to assaults on breathing from without and within.

We have powerful weapons to defend breathing. Medical science, public health, engineering, and business, all play important roles in the effort to support breathing. Yet, Gasping for Air also reminds readers how breathing support has been at the eye of the storm in many ethical dilemmas of modern healthcare. Here, Kevin Glynn, an experienced pulmonologist and lifelong asthma sufferer tells stories about the third most common cause of premature deaths in the developed world, describes lethal forces in Nature (infections, genetic predispositions) and from human activities (dusty occupations, tobacco smoking, chemical toxins, drug overdoses) that threaten to suffocate us, and offers sage advice for how to prevent and address those threats and the damage they cause.

Kevin Glynn: Kevin Glynn, MD, is a senior physician with ScrippsHealth in La Jolla, California. His 30 years treating respiratory disorders and his personal experience as someone with asthma make him uniquely qualified to tell the story of breathing. He practiced as a pulmonary specialist in San Diego and was Medical Director of Respiratory Care at Scripps Mercy Hospital. Recognized as a leader in San Diego medicine, Dr. Glynn was chief of pulmonary medicine, chief of medicine, and chief of staff at Scripps Mercy. He chaired the Biomedical Ethics Committee of the San Diego County Medical Society. Recognized for his contributions as a bedside teacher, he was a clinical professor at UCSD School of Medicine, and received the Award for Sustained Excellence in Teaching at Scripps Mercy. A talented story teller, Dr. Glynn has published 20 articles in nationally circulated journals on topics related to clinical medicine, biomedical ethics, and professionalism in medicine. He was a long-time member of the Editorial Board of the San Diego Physician, the monthly journal of the San Diego County Medical Society, and for two years served as its editor. He is a member of the San Diego Writers & Editors Guild, and San Diego Writers’ Ink. For three years he was medical commentator on the radio program, Tuned in on Health, which aired weekly in San Diego, and was a frequent media analyst on medical topics.