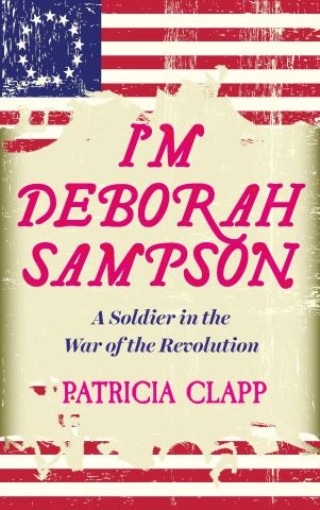 After experiencing severe hardship during her young life, fifteen-year old Deborah Sampson has finally found true love with eighteen-year old Robbie Thomas. Before the two of them can get married, Robbie feels obligated to fight for his country against the British in the Revolutionary War. When he is killed in action, a grief-stricken Deborah decides to carry on in his honor by disguising herself as a man and joining the Continental Army. In addition to facing the horrors of war, "Private Robert Shurtlieff" must go to extraordinary lengths to prevent his fellow soldiers from discovering his real identity. Based on a true story, I'm Deborah Sampson is a classic work of historical young adult fiction from one of the most popular writers in the genre.

Patricia Clapp: Patricia Clapp (1912 – 2003) was an American writer of fiction for children and young adults. Her first novel, Constance: A Story of Early Plymouth (1968) is based on the life of her forbear Constance Hopkins, a passenger on the Mayflower. It was nominated for the National Book Award in 1969. Her second book, Jane-Emily (1969) was described by the New York Times nearly fifty years after its publication as "one of the great children’s ghost stories, featuring a nasty little dead girl who is not at all pleased when a good little living girl comes to stay in her old house." Most of Clapp's novels were written as fictionalized accounts of historical events. I'm Deborah Sampson: A Soldier in the War of the Revolution is loosely based on the life of Deborah Sampson, a young woman who disguised herself as a man and served in the 4th Massachusetts Regiment during the Revolutionary War. Witches' Children: A Story of Salem (1982) and The Tamarack Tree: A Novel of the Siege of Vicksburg (1986) explore the history of the Salem witch trials and the Siege of Vicksburg during the Civil War, respectively.