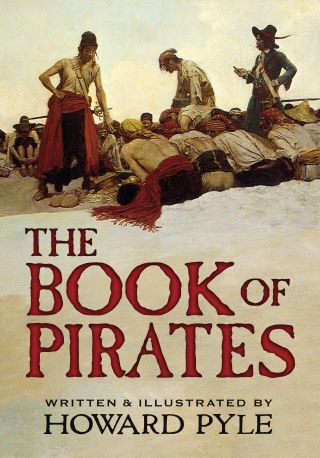 The Book of Pirates

Rarely have the exploits of marauding pirates and buccaneers of the Spanish Main been more vividly recounted than in the stories of author and illustrator Howard Pyle. Possessed of a unique talent for recapturing the flavor of bygone eras, Pyle wrote and illustrated these highly readable sagas of the sea wolves who sailed under the dreaded black flag.
This treasury includes "The Ghost of Captain Brand," "Tom Chist and the Treasure Box," "Jack Ballister's Fortunes," "The Ruby of Kishmoor," "Blueskin, the Pirate,"  "Captain Scarfield," and other swashbuckling yarns. In addition to a formidable crew of fictional cutthroats, the tales also feature such real-life figures as Blackbeard, Captain Kidd, and Henry Morgan. Enhanced with 80 of Pyle's own incomparable illustrations—including 16 full-page color plates—this book will delight any lover of adventures on the high seas.

Howard Pyle:
Howard Pyle (1853–1911) is remembered as the Father of American Illustration on account of his teachings at the turn of the 20th century. His small school produced several industry-leading illustrators, including N. C. Wyeth, Harvey Dunn, Violet Oakley, and Jessie Willcox Smith. Pyle's stories and drawings epitomize the era known as the Golden Age of American Illustration, setting a standard of excellence with tales and images remarkable for their engaging simplicity and penetrating realism.