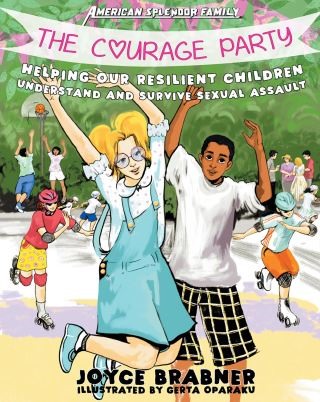 The Courage Party is a "gently explicit" book about sexual abuse, written for kids to read alone or (better) with a "good grownup."  Parental guide included. After escaping a playground predator, a little girl learns to understand what happened and how to carry herself with pride and conviction after five older women organize a "Courage Party" for her and share stories from their own lives. Interactions with police, pediatricians, prosecutors, victim advocates, a community rape crisis center and courthouse are depicted as young Danielle learns she is more than a survivor. She is a "crime fighter," powered by her own truthfulness and courage, able to protect other kids in the park, with many good grownups on her side.Based on a true story, Dani's own good grownup talks in the margins to parents about key ideas: ending conflicting messages ("You didn't do anything wrong.  But don't tell anybody!"); understanding the difference between loving adult sexual intercourse and sexual abuse; interacting with authorities; and helping your child deal with malicious gossip, taunts and jeers.Written by award-winning non-fiction graphic novelist Joyce Brabner with an assist from Danielle and illustrated by Gerta Oparaku. Both Joyce and Danielle were first introduced in Harvey Pekar's autobio series American Splendor and the movie of that same name.

Joyce Brabner: Joyce Brabner and her family are the subject of the 2004 HBO film American Splendor about her and her late-husband, Harvey Pekar, and their life spent expanding the comic book medium beyond superheroes. She is the author of numerous books, including Our Cancer Year and nonfiction comic collaborations with Alan Moore, among many others. She lives in Cleveland, OH.