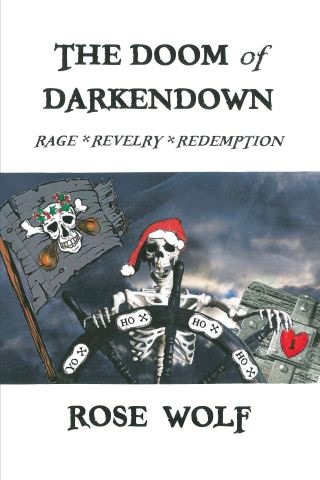 YO-HO-WHO? Dispatched by a dying professor to the world of Darkendown, writer Robin Adam has to assume control of its afterlife prison colony. She must also rule over a country inhabited by pig-and pterodactyl-folk, literary characters, and--most feared of all--the infamous “Christmas Pirates.” Robin will need all these strange (but staunch) allies as she faces her Great Test: the redemption of her own brother. To be a true Judge, she must first take a seat in her own dock--and not the most wonderful people or the wildest powers can stand between her and her Doom.

Rose Wolf: Spoiled for a career in reality by her mother, who made her witch hats out of grocery bags and took her on supernatural walks to look for fairies under toadstools, Rose Wolf decided to become a writer of fantasy prose and poetry. After taking a Ph.D. in that field from Binghamton University, she worked for a Fantasy Grand Master, married a wizard, and lived in Scotland. She now makes her home in Salem, Massachusetts, where she sells magic wands, teaches imaginative literature, and draws inspiration for her writing from her Manx cat familiar, Golden Moon Bear.