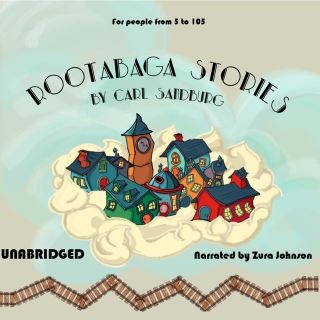 In the village of Liver-and-Onions, there was a Potato Face Blind Man who used to play an accordion on the corner near the post office. The sometime narrator of these tales, he transports readers and listeners to Rootabaga Country, where the railroad tracks go from straight to zigzag, the pigs wear bibs, and the Village of Cream Puffs floats in the wind, looking like a little hat that you could wear on the end of your thumb.

Carl Sandburg, the beloved folk chronicler and three-time Pulitzer Prize winner, invented these stories for his own daughters. Populated by corn fairies, circus performers, and such memorable characters as Poker Face the Baboon, Hot Dog the Tiger, and Gimme the Ax, Rootabaga Country is built with the homespun poetry of the American frontier. The stories’ inspired nonsense—loaded with rhythm, humor, and tongue-twisting names—fires the imagination and pulls at the heartstrings.

Carl Sandburg (1878–1967) was twice awarded the Pulitzer Prize, first in 1940 for his biography of Abraham Lincoln and again in 1951 for Complete Poems. In 1952, he was awarded the American Academy of Arts and Letters Gold Medal for History. Before becoming known as a poet, he worked as a milkman, an ice harvester, a dishwasher, a salesman, a fireman, and a journalist. Among his classics are the Rootabaga Stories, which he wrote for his young daughters at the beginning of his long and distinguished literary career.