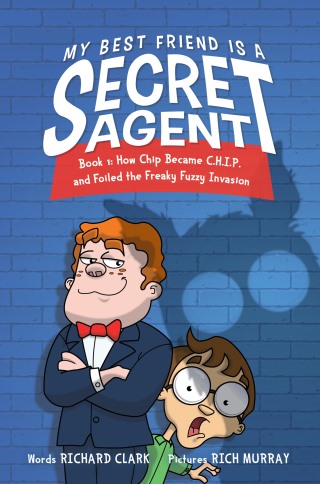 My Best Friend Is a Secret Agent

How Chip became C.H.I.P. and Foiled the Freaky Fuzzy Invasion

C.H.I.P.ing away at danger one mission at a time!

Ten-year-old Nort McKrakken is a pint-sized computer genius and madcap inventor. Fourteen-year-old Chip Munson is his best friend and loyal guinea pig. When Nort creates C.H.I.P.—a microsized computer thingy—and sticks it on his best friend’s tooth, it turns Chip into a real-life secret agent. With Chip’s C.H.I.P. and Nort’s brain, the pair is ready for anything . . . even middle school.

In the first My Best Friend Is a Secret Agent book, Nort and Chip take down an evil cheesemonger who is threatening to choke Vortville with an icky stink. But smelly cheese is nothing compared to Seth Mindwarp and his band of Freaky Fuzzies who want to take over the minds of all the kids at Fuzzy Con. Will our heroic duo be able to save the town again . . . or will Chip’s C.H.I.P. fritz out?

Richard Clark has written for many kids’ TV shows on Disney, Nickelodeon, Netflix, CBC, BBC and many other foreign networks. He lives just outside of Toronto with his wife and their two children.


About the Illustrator
Rich Murray has over thirty years’ experience in illustration, animation and design for such clients as RBC, Energizer and Canadian Tire. He also designs mobile apps. He lives just outside of Toronto with his wife and son.