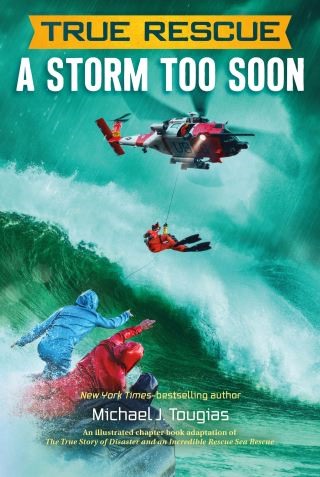 True Rescue: A Storm Too Soon

When a sailboat disappears in the Gulf Stream during a disastrous storm, three weary sailors struggle to survive aboard a life raft in violent waves 80-feet tall in this illustrated chapter book adaptation (for readers 6-9) of A Storm Too Soon: : A Remarkable True Survival Story in 80-Foot Seas.

On May 2, 2007, three expert sailors embark on an epic voyage from Florida to France. But the trip of a lifetime soon turns into a nightmare when their sailboat disappears along the Gulf Stream in the throes of a relentless storm. From this point onward, their fate lies in the hands of four courageous coast guardsmen who must navigate brutal conditions in their Search and Rescue mission.

This second book in the True Rescue chapter book series is a suspenseful, incredible story that puts newly independent readers in the middle of the action.

Michael J. Tougias: Michael J. Tougias is the author of many award-winning true rescue stories, including the New York Times-bestseller The Finest Hours, A Storm Too Soon, Into the Blizzard, and Attacked at Sea. He also published a memoir, The Waters Between Us: A Boy, A Father, Outdoor Misadventures and the Healing Power of Nature. A frequent lecturer on his work, Tougias splits his time between Massachusetts and Florida.