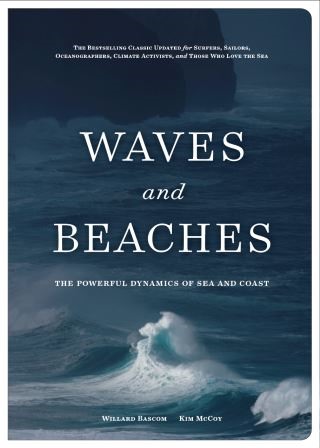 The Powerful Dynamics of Sea and Coast

The Bestselling Classic Updated for Surfers, Sailors, Oceanographers, Climate Activists, and Those Who Love the Sea

First published in 1963 and updated in 1979, this classic was an essential handbook for anyone who studies, surfs, protects, or is fascinated by the ocean. The original author, Willard Bascom, was a master of the subject and included a wealth of information, based on theory and statistics, but also anecdotal observation and personal experience. It brought to the general public understanding of the awesome and complex power of the waves.

This revision from Kim McCoy adds recent facts and anecdotes to update the book’s relevance in the time of climate change. One of the most significant effects of global warming will be sea-level rise. What will this mean to waves and beaches, and what effects are we already seeing? New text and photos cover events such as the Indian Ocean tsunami of 2004, Hurricane Katrina flooding of 2005, and the 2011 earthquake and resulting devastation in Fukishima.

As well as students, surfers, and the general public, this updated edition of a beloved classic is an essential handbook for climate scientists and ocean activists, providing clear explanations and detailed resources for the constant battle to preserve the shore.

Kim McCoy's ocean research began where the land and sea merge - with surf zone wave dynamics and continues today with the coastal effects of climate change.

Educated in Germany, France and the US, Kim was presented with the Scientific Achievement Award in 2018 for his work as a Principle Scientist with NATO in Italy. Prior to Italy, Kim managed Ocean Sensors, Inc., was the Marine Technology Society Chair for Oceanographic Instrumentation and was awarded several patents. Kim is fluent in multiple languages.

He has been seduced by beaches and observed waves on all seven continents; smeared in the fluid mud of the Amazon, journeyed along the Mekong, Nile and Mississippi Deltas, traveled the Australian coastline, plunged into the Antarctic Ocean (without a wetsuit), crossed the Pacific, Atlantic, Drake's Passage on ships and sailed a boat from Africa to the Caribbean.

The adventure continues: Kim recently completed an Ironman and will continue to swim, dive, surf, rock climb and paraglide until motion stops, viscosity ceases, buoyancy is overwhelmed. Kim lives in San Diego.|||Willard Newell Bascom (November 7, 1916 in New York City – September 20, 2000 in San Diego, California) was an engineer, adventurer and scientist, as well as a writer, photographer, painter, miner, cinematographer, and archeologist, who first proposed using Neoprene for wetsuits to fellow scientist Hugh Bradner. He authored several books, which include the topics of waves, geology, archaeology, poetry, and oceanography. In his book Deep Water, Ancient Ships he first proposed the hypothesis that anoxic water in the Black Sea would preserve ancient Black Sea shipwrecks. He led the first test drillings for Project Mohole, and was project director from 1960-1962. Bascom was a consultant to the Advisory Committee on Government Organization. He also served as the Technical Director of the Advisory Committee on Civil Defense of the National Academy of Science and National Research Council. He is the original author of Waves and Beaches, originally published in 1963 and reissued in 1979 (Anchor).