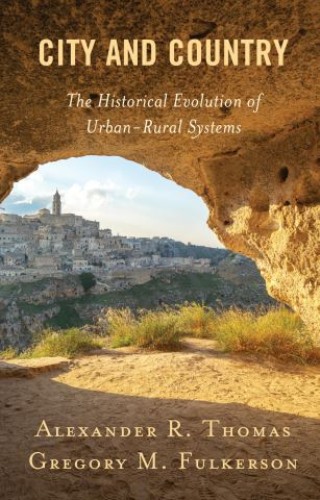 The Historical Evolution of Urban-Rural Systems

City and Country: The Historical Evolution of Urban-Rural Systems begins with a simple assumption: every human requires, on average, two-thousand calories per day to stay alive. Tracing the ramifications of this insight leads to the caloric well: the caloric demand at one point in the environment. As population increases, the depth of the caloric well reflects this increased demand and requires a population to go further afield for resources, a condition called urban dependency. City and Country traces the structural ramifications of these dynamics as the population increased from the Paleolithic to today. We can understand urban dependency as the product of the caloric demands a population puts on a given environment, and when those demands outstrip the carry capacity of the environment, a caloric well develops that forces a community to look beyond its immediate area for resources. As the well deepens, the horizon from which resources are gathered is pushed further afield, often resulting in conflict with neighboring groups. Prior to settled villages, increases in population resulted in cultural (technological) innovations that allowed for greater use of existing resources: the broad-spectrum revolution circa 20 thousand years ago, the birth of agricultural villages 11 thousand years ago, and hierarchically organized systems of multiple settlements working together to produce enough food during the Ubaid period in Mesopotamia seven-thousand years ago—the first urban-rural systems. As cities developed, increasing population resulted in an ever-deepening morass of urban dependency that required expansion of urban-rural systems. These urban-rural dynamics today serve as an underlying logic upon which modern capitalism is built. The culmination of two decades of research into the nature of urban-rural dynamics, City and Country argues that at the heart of the logic of capitalism is an even deeper logic: urbanization is based on urban dependency.

Alexander R. Thomas is professor of sociology at SUNY Oneonta.

Gregory M. Fulkerson is professor and chair of the Department of Sociology at SUNY Oneonta.

Alexander R. Thomas is professor of sociology at SUNY Oneonta.

Gregory M. Fulkerson is professor and chair of the Department of Sociology at SUNY Oneonta.