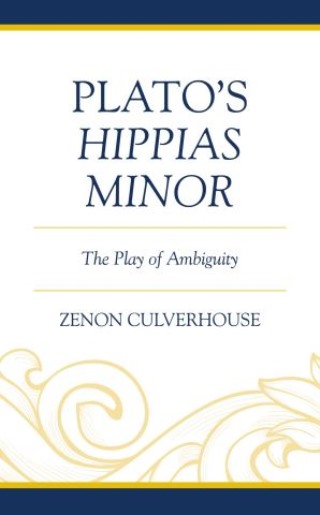 The Play of Ambiguity

Philosophers accuse Socrates of advancing unfair, if not fallacious, arguments in Plato’s Hippias Minor more than in most other dialogues. In Hippias Minor, Socrates appears to defend the trickster Odysseus, and in the course of doing so he argues for outrageous claims: the honest person and the liar are no different, and the good person is one who does wrong voluntarily. In Plato’s Hippias Minor: The Play of Ambiguity, Zenon Culverhouse argues that Socrates’ questionable behavior is no coincidence in a dialogue about deception and that Socrates is examining what counts as deception and how it reflects one’s excellence. More broadly, the dialogue is about the relationship between the speaker and what is said, between agent and action. Thus, the dialogue marks an important contribution not only to Socrates’ thinking about virtue and voluntary action but also to Plato’s portrait of Socrates. For the latter, Culverhouse argues that the dialogue further defines the sometimes thin line between Socrates and his contemporaries, the sophists. Rather than exploiting ambiguity in key terms of the argument to trip up his opponent, Socrates playfully explores these ambiguities to illuminate Hippias’—and perhaps our own—serious commitments about human excellence.

Zenon Culverhouse is associate professor of philosophy at the University of the Incarnate Word in San Antonio.