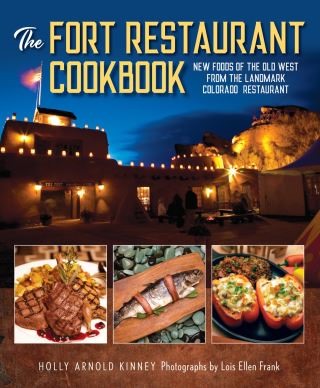 New Foods of the Old West from the Landmark Colorado Restaurant

The Fort Cookbook…. a celebration of New Foods of the Old West.

Constructed as a family home and then living history museum in 1961, the adobe Fort was built to emulate the frontier trading posts of the nineteenth century. Taking its cues from the architecture and the foods of the Southwest, the building and the menu hearken back to an earlier time while providing patrons with a modern and elegant dining experience.

This cookbook is a celebration of The Fort with more than150 favorite recipes developed throughout its fifty-eight-year history, including some from its most recent menus, and sixty-five full-color recipe photos. The Fort was an early proponent of locavore food and features regional game recipes, which brings additional appeal to this celebratory cookbook and memento. Some of the new and most popular recipes in this cookbook include Thomas Jefferson’s Green Chile Mac & Cheese Savory “Pudding”; Marinated Rack of Lamb with Couscous; and Mexican Chocolate Ice Cream Mud Pie.

Holly Arnold Kinney is a Colorado restaurateur, culinary leader, author/publisher, and founder/Executive Director of the non-profit organization, Tesoro Cultural Center. Ms. Kinney lived at The Fort with her family in 1963 and worked in the restaurant. She owned an international public relations firm from 1981-2003, specializing in culinary industries. Today she runs The Fort with ninety employees she refers to as her “Fort family.”