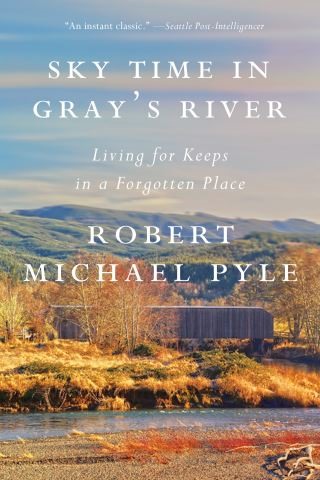 Living for Keeps in a Forgotten Place

An ecologist reflects on the natural wonders of the Pacific Northwest as he describes the lives of plants, animals, and humans through every season of the year during his thirty years in the village of Gray's River, near the mouth of the Columbia River--long out of print, this classic of nature writing is being given a new life in trade paperback with a new afterword by the author.

Sky Time in Gray's River is an elegant meditation on life in the rural Northwest. Although Robert Michael Pyle is a lepidopterist, and southwestern Washington is notable for its lack of butterflies, something about the Gray's River Valley spoke to him when he visited more than forty years ago. Since then he has lived near the village of Gray's River, one of the first to be established near the mouth of the Columbia River and only tenuously connected to the world of the twenty-first century. Pyle brings Gray's River to life by compressing those forty years into twelve chapters, following the lives of the people, plants, and animals that make this valley their home, month by month through the seasons.

Through his loving portrait of one riverside village, Pyle illustrates how a special place can transform anyone lucky enough to find it. He shows that you don't have to travel far to see something new every day--if you know how to look.

Robert Michael Pyle: ROBERT MICHAEL PYLE is a biologist and writer who has worked in conservation biology around the world. His twenty-four books include Where Bigfoot Walks, four collections of poetry, the novel Magdalena Mountain, and a flight of butterfly books. Founder of the Xerces Society for Invertebrate Conservation, he is a Guggenheim Fellow and Honorary Fellow of the Royal Entomological Society. Pyle lives, writes, and studies natural history in rural southwest Washington.