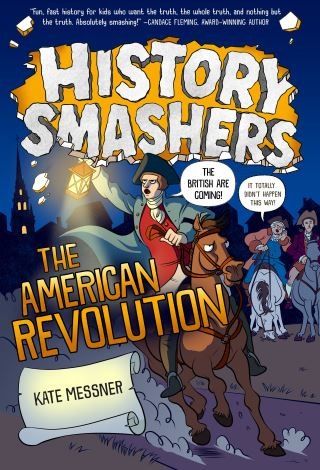 Myths! Lies! Secrets! Uncover the hidden truth behind the Revolutionary War with beloved educator/author Kate Messner. The fun mix of sidebars, illustrations, photos, and graphic panels make this perfect for fans of I Survived! and Nathan Hale's Hazardous Tales.

On April 18, 1775, Paul Revere rode through Lexington and Concord, Massachusetts, shouting, "The British are coming!" to start the American Revolution.RIGHT?

WRONG! Paul Revere made it to Lexington, but before he could complete his mission, he was captured!

The truth is, dozens of Patriots rode around warning people about the Redcoats' plans that night. It was actually a man named Samuel Prescott who succeeded, alerting townspeople in Lexington and then moving on to Concord. But the Revolutionary War didn't officially start for more than a year after Prescott's ride. No joke.

Discover the nonfiction series that smashes everything you thought you knew about history. Don't miss History Smashers: The Mayflower, Women's Right to Vote, Pearl Harbor, and Titanic.

Kate Messner: KATE MESSNER is passionately curious and writes books that encourage kids to wonder, too. Her titles include award-winning picture books, like Over and Under the Snow; novels, like Breakout and Chirp; the Fergus and Zeke easy reader series, and the popular Ranger in Time chapter books, and works of nonfiction with a focus on nature and history. Before becoming a full time writer, Kate was a TV journalist and National Board certified middle school English teacher. She lives on Lake Champlain with her family and is trying to summit all 46 Adirondack High Peaks in between book deadlines. Visit katemessner.com and Facebook: Kate Messner for more information and follow her on Twitter @katemessner.