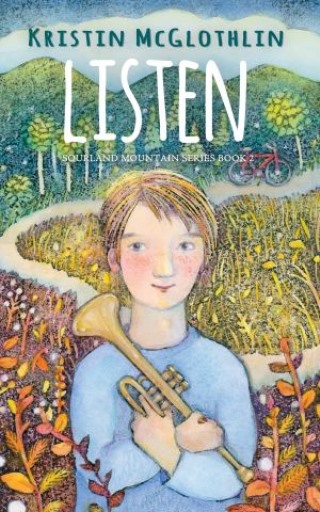 Winner of the 2021 Silver Moonbeam Award for Pre-Teen Fiction

In order to play more music in the future, Gwilym first has to deal with the past.

Thirteen-year-old Gwilym Duckworthy has a supportive family consisting of his dad, stepmom Ferguson, grandma, aunt and uncle, and his older siblings, sister Bex and brother Clay. His best friends, Cat and Hattie (who is also his cousin), live on either side of him. He’s going to learn how to play the trumpet, and he has a job delivering Cat’s uncle Hal’s produce. His life is good.

Listen opens on Thanksgiving day—Gwilym’s favorite holiday. It’s a day he can spend with his family and friends playing their annual football game and scavenger hunt. What could go wrong? Maybe a call from his mom—the one family member who left them when he was three years old? She is going to be in town with her jazz band to play two nights at Princeton University. Why has she decided to contact only him? Should Gwilym meet with her without his sister and brother? Does he want to know why she left them?

The second book in the Sourland Mountain series, Listen delves into the issue of abandonment and how through forgiveness or acceptance the characters find out they are more alike than unalike.

Before becoming an award-winning author, Kristin McGlothlin was the assistant curator of education at the Norton Museum of Art, where she designed and managed the Norton’s art and music programs. She has a BA in Art History and a BA and MA in English. Her Master’s thesis was on the author/illustrator Edward Gorey. McGlothlin wrote and created the artwork for the children’s picture book Andy’s Snowball Story, about the contemporary artist Andy Goldsworthy. Her poem “California T-shirt” was published in the literary magazine Coastlines, and “Roman Ruins in a Modern City” won a haiku contest and was read on Travel with Rick Steves. McGlothlin’s short story “The Red Door” was one of twenty-three finalists among more than four hundred entries in the Florida Weekly 2018 Writing Challenge. Her debut middle-grade novel, Drawing with Whitman, won the 2019 Moonbeam Silver Medal for Pre-Teen Fiction. It is the first book in the four-book Sourland Mountain Series. A writer since she was thirteen, only now, like a million years later, has she settled upon it as her career.