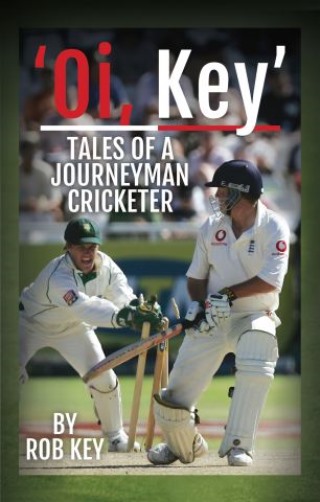 Tales of a Journeyman Cricketer

The Sky Sports commentator and former Kent captain “show[s] his great cricketing brain and insight into those that play it and the game itself” (Royal Ascot Cricket Club).

EX-England batsman Rob Key is one of the wittiest pundits on TV. Whether it’s a drizzly day-nighter in Derby or a World Cup Final at Lord’s, Key’s wizardry with the mic more than matches that which he had with the bat.

In his new book, Key reflects on the past and present of an ever-unforgiving game, in so doing shining light into the darkest recesses of the locker room. What he finds there is as amusing as it is shocking, as farcical as it is fascinating.

Known as one of the sharpest cricket brains around, Key casts a knowledgeable and sometimes acerbic eye over such areas as fitness, captaincy, and sledging, while delivering a close-up view of some of the biggest names in the game.

More than anything, Key reveals just what it is to be a professional cricketer, the camaraderie, the comedy, and, of course, the calamity.

“Key has produced a book which reflects his personality and career beautifully, a lovely gentle jaunt through the career of a likeable honest player, a player who probably deserved more chance at the highest level, but with storytelling like this, it is easy to see why his broadcasting career has blossomed and taken him now to the highest level of his new chosen career.” —Deep Extra Cover

Rob Key:
Rob Key is a former professional cricketer who originally represented Kent County Cricket Club and is a former member of One Day International sides and the England Test match. Key was also a regular commentator on Sky Sports TV's coverage of county cricket whilst he was still a player at Kent. He can also be found at Pundit studios covering the of international tours in the English close-season.