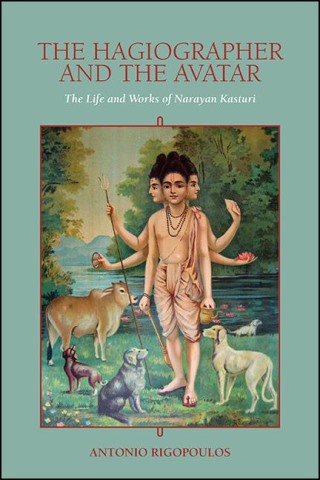 The Hagiographer and the Avatar

The Life and Works of Narayan Kasturi

In this biographical study, Antonio Rigopoulos explores the fundamental role of a hagiographer within a charismatic religious movement: in this case, the postsectarian, cosmopolitan community of the Indian guru Sathya Sai Baba. The guru's hagiographer, Narayan Kasturi, was already a distinguished litterateur by the time he first met Sathya Sai Baba in 1948. The two lived together at the guru's hermitage more or less continuously from 1954 up until Kasturi's death, in 1987. Despite Kasturi's influential hagiography, Sathyam Sivam Sundaram, little scholarly attention has been paid to the hagiographer himself and his importance to the movement. In detailing Kasturi's relationship to Sathya Sai Baba, Rigopoulos emphasizes that the hagiographer's work was not subordinate to the guru's definition of himself. Rather, his discourses with the holy man had a reciprocal and reinforcing influence, resulting in the construction of a unified canon. Furthermore, Kasturi's ability to perform a variety of functions as a hagiographer successfully mediated the relationship between the guru and his followers. Drawing on years of research on the movement as well as interviews with Kasturi himself, this book deepens our understanding of this important pan-Indian figure and his charismatic religious movement.

Antonio Rigopoulos: Antonio Rigopoulos is Professor of Sanskrit Language and Literature at the Ca' Foscari University of Venice, Italy. His previous books include The Life and Teachings of Sai Baba of Shirdi and Dattātreya: The Immortal Guru, Yogin, and Avatāra: A Study of the Transformative and Inclusive Character of a Multi-faceted Hindu Deity, both published by SUNY Press.