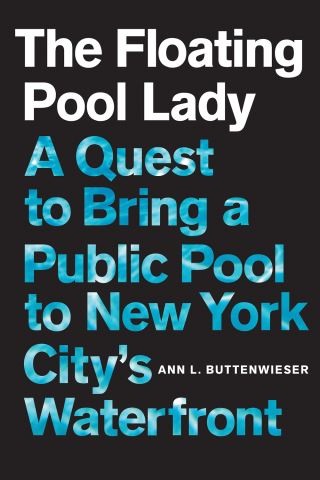 Why on earth would anyone want to float a pool up the Atlantic coastline to bring it to rest at a pier on the New York City waterfront? In The Floating Pool Lady, Ann L. Buttenwieser recounts her triumphant adventure that started in the bayous of Louisiana and ended with a self-sustaining, floating swimming pool moored in New York Harbor.

When Buttenwieser decided something needed to be done to help revitalize the New York City waterfront, she reached into the city's nineteenth-century past for inspiration. Buttenwieser wanted New Yorkers to reestablish their connection to their riverine surroundings and she was energized by the prospect of city youth returning to the Hudson and East Rivers. What she didn't suspect was that outfitting and donating a swimming facility for free enjoyment by the public would turn into an almost-Sisyphean task. As she describes in The Floating Pool Lady, Buttenwieser battled for years with politicians and struggled with bureaucrats as she brought her "crazy" scheme to fruition.

From dusty archives in the historic Battery Maritime Building to high-stakes community board meetings to tense negotiations in the Louisiana shipyard, Buttenwieser retells the improbable process that led to a pool named The Floating Pool Lady tying up to a pier at Barretto Point Park in the Bronx, ready for summer swimmers.

Throughout The Floating Pool Lady, Buttenwieser raises consciousness about persistent environmental issues and the challenges of developing a constituency for projects to make cities livable in the twenty-first century. Her story and that of her floating pool function as both warning and inspiration to those who dare to dream of realizing innovative public projects in the modern urban landscape.

Ann L. Buttenwieser is an urban planner and urban historian. She has taught at the Graduate School of Architecture, Planning and Preservation at Columbia University and at the Macaulay Honors College at the City University of New York. She is the author of Governors Island and Manhattan Water-Bound.