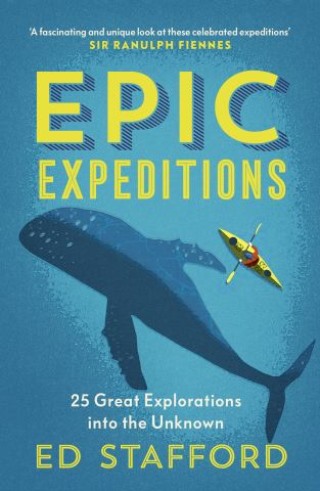 25 Great Explorations into the Unknown

What does it take to survive in the unknown?

Explorer and survival expert, Ed Stafford captures the spirit of adventure in 25 of the greatest expeditions of all time.

From 1864-2018, intrepid explorers blazed a trail with round-the-world records, the ascent of Everest, crossing the Australian desert by camel and kayaking the North Atlantic Ocean. They conquered mountains, deserts, jungles and seas venturing into the most remote and inhospitable climes on the planet.

Peeking inside each kit bag (including his own), Ed Stafford reveals how the great explorers achieved their awe-inspiring missions to find out more about our world, and how the equipment they carried with them determined the success or failure of their expedition.

Ed Stafford is a British explorer and the face of survival on the Discovery Channel. He holds the Guinness World Record for being the first person ever to walk the length of the Amazon River.

‘Walking from the Pacific, over the Andes and along the entire length of the Amazon to the Atlantic is truly extraordinary ... To do all this in more than 800 continuous days with just a backpack puts Stafford's endeavour in the top league of expeditions past and present.’
Sir Ranulph Fiennes

Ed Stafford: Ed Stafford is the Guinness World Record-holding first person to walk the Amazon River. Sir Ranulph Fiennes described his expedition as being "truly extraordinary… in the top league of expeditions past and present." A former British Army captain, Ed filmed and blogged his deadly journey and engaged followers all over the world for almost two-and-a-half years. His footage was made into a Discovery Channel documentary and was sold to over 100 countries and he authored the best-selling book, Walking the Amazon. Ed has gone on to film seven survival series and is now an established face of Discovery Channel, and his seventh series, Ed Stafford: First Man Out, aired in late 2018 globally.