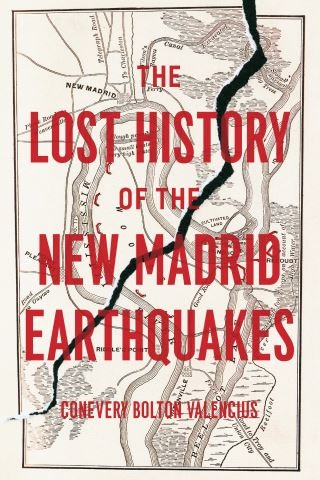 The Lost History of the New Madrid Earthquakes

From December 1811 to February 1812, massive earthquakes shook the middle Mississippi Valley, collapsing homes, snapping large trees midtrunk, and briefly but dramatically reversing the flow of the continent’s mightiest river. For decades, people puzzled over the causes of the quakes, but by the time the nation began to recover from the Civil War, the New Madrid earthquakes had been essentially forgotten.
In The Lost History of the New Madrid Earthquakes, Conevery Bolton Valencius remembers this major environmental disaster, demonstrating how events that have been long forgotten, even denied and ridiculed as tall tales, were in fact enormously important at the time of their occurrence, and continue to affect us today. Valencius weaves together scientific and historical evidence to demonstrate the vast role the New Madrid earthquakes played in the United States in the early nineteenth century, shaping the settlement patterns of early western Cherokees and other Indians, heightening the credibility of Tecumseh and Tenskwatawa for their Indian League in the War of 1812, giving force to frontier religious revival, and spreading scientific inquiry. Moving into the present, Valencius explores the intertwined reasons—environmental, scientific, social, and economic—why something as consequential as major earthquakes can be lost from public knowledge, offering a cautionary tale in a world struggling to respond to global climate change amid widespread willful denial.
Engagingly written and ambitiously researched—both in the scientific literature and the writings of the time—The Lost History of the New Madrid Earthquakes will be an important resource in environmental history, geology, and seismology, as well as history of science and medicine and early American and Native American history.