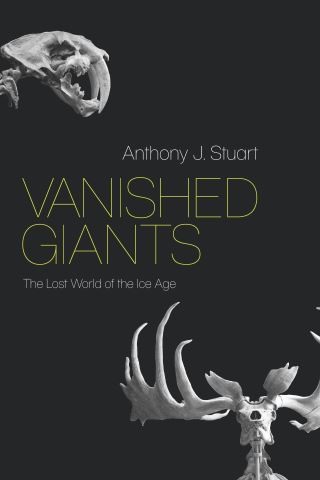 The Lost World of the Ice Age

Long after the extinction of dinosaurs, when humans were still in the Stone Age, woolly rhinos, mammoths, mastodons, sabertooth cats, giant ground sloths, and many other spectacular large animals that are no longer with us roamed the Earth. These animals are regarded as “Pleistocene megafauna,” named for the geological era in which they lived—also known as the Ice Age.

In Vanished Giants: The Lost World of the Ice Age, paleontologist Anthony J. Stuart explores the lives and environments of these animals, moving between six continents and several key islands. Stuart examines the animals themselves via what we’ve learned from fossil remains, and he describes the landscapes, climates, vegetation, ecological interactions, and other aspects of the animals’ existence. Illustrated throughout, Vanished Giants also offers a picture of the world as it was tens of thousands of years ago when these giants still existed. Unlike the case of the dinosaurs, there was no asteroid strike to blame for the end of their world. Instead, it appears that the giants of the Ice Age were driven to extinction by climate change, human activities—especially hunting—or both. Drawing on the latest evidence provided by radiocarbon dating, Stuart discusses these possibilities. The extinction of Ice Age megafauna can be seen as the beginning of the so-called Sixth Extinction, which is happening right now. This has important implications for understanding the likely fate of present-day animals in the face of contemporary climate change and vastly increasing human populations.

Anthony J. Stuart: For more than thirty years, Anthony J. Stuart has focused on the extinction of Ice Age megafauna and has published extensively in scientific journals such as Nature, Quaternary Science Reviews, and Quaternary International. He has also contributed to popular science publications including New Scientist, Geoscientist, Pour La Science, Spektrum der Wissenschaft, and Grizmek’s Animal Life Encyclopedia and served as a consultant for the three-part BBC series Ice Age Giants.