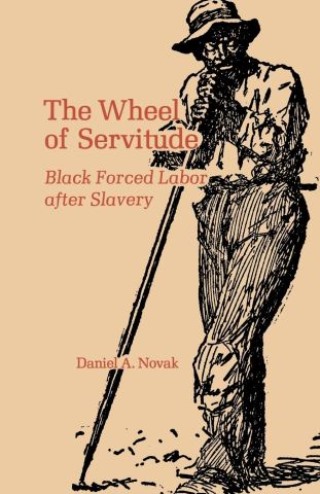 The Wheel of Servitude

Emancipation brought an end to many of the evils of slavery, but it did not do away with involuntary servitude in the South. Even during Reconstruction, state legislatures passed laws that bound laborers to the landowner with a nearly unbreakable tie—which still chains many a rural black to what a 1914 Supreme Court ruling called an "ever-turning wheel of servitude."

Daniel Novak shows how federal, state, and local regulations combined in an undisguised effort to keep southern agriculture supplied with black labor. A freedman who did not immediately enter into a labor contract was subject to arrest as a vagrant. Once a contract was agreed upon, it was a criminal offense for a laborer to fail to carry it out, no matter how unfair the terms might be.

If, as was almost inevitable, the freedman fell into debt to the landowner, he could be kept in service until repayment-and exorbitant interest rates and judicious bookkeeping could often postpone that day indefinitely. Novak traces the sporadic efforts of the federal government to do away with this kind of peonage. In studying the details of the legal basis for peonage in the South, he breaks new ground. The institution has aroused surprisingly little interest in the past; this compelling account should do much to establish that peonage is one of the most severe and widespread violations of civil rights in the nation.