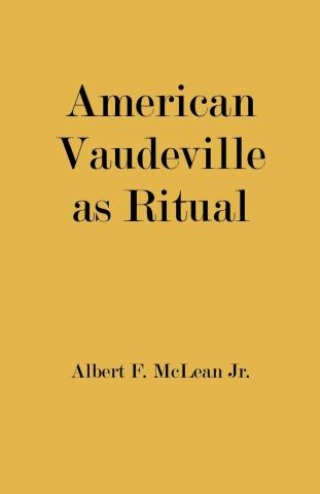 This study affords an entirely new view of the nature of modern popular entertainment. American vaudeville is here regarded as the carefully elaborated ritual serving the different and paradoxical myth of the new urban folk. It demonstrates that the compulsive myth-making faculty in man is not limited to primitive ethnic groups or to serious art, that vaudeville cannot be dismissed as meaningless and irrelevant simply because it fits neither the criteria of formal criticsm or the familiar patterns of anthropological study.

Using the methods for criticism developed by Susanne K. Langer and others, the author evaluates American vaudeville as a symbolic manifestation of basic values shared by the American people during the period 1885-1930. By examining vaudeville as folk ritual, the book reveals the unconscious symbolism basic to vaudeville-in its humor, magic, animal acts, music, and playlets, and also in the performers and the managers—which gave form to the dominant American myth of success. This striking view of the new mass man as a folk and of his mythology rooted in the very empirical science devoted to dispelling myth has implications for the serious study of all forms of mass entertainment in America. The book is illustrated with a number of striking photographs.