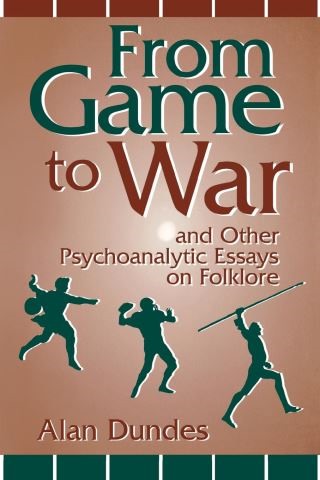 From Game to War and Other Psychoanalytic Essays on Folklore

Although folklore has been collected for centuries, its possible unconscious content and significance have been explored only since the advent of psychoanalytic theory. Freud and some of his early disciples recognized the potential of such folklorist genres as myth, folktale, and legend to illuminate the intricate workings of the human psyche. Alan Dundes is a renowned folklorist who has successfully devoted the better part of his career to applying psychoanalytic theory to the materials of folklore. From Game to War offers five of his most mature essays on this topic.

Dundes begins with a comprehensive survey of the history of psychological studies of folklore in the United Slates. He then presents a striking analysis of the spectrum of behavior associated with male competitive events ranging from traditional games—such as soccer and American football—to warfare. He argues that all of these activities can be seen as forms of macho battle to determine which individual or team feminizes his or its opponents.

This is followed by a study of the saga of William Tell, one of the most celebrated legends in the world. A novel treatment of the biblical flood myth in terms of male pregnancy is the penultimate essay, while the concluding article proposes an ingeniously imaginative interpretation of the underpinnings of anti-Semitism.

Alan Dundes: Alan Dundes, professor of anthropology and folklore at the University of California, Berkeley, is author of Parsing Through Customs: Essays by a Freudian Folklorist.