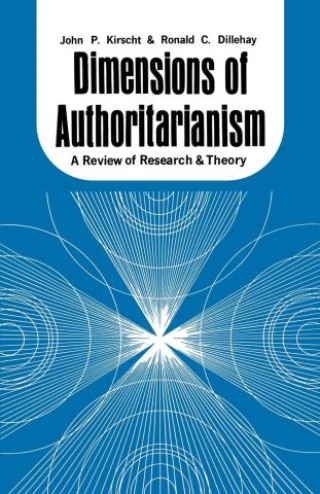 A Review of Research and Theory

The concept of authoritarianism, first defined in The Authoritarian Personality published in 1950, has since been treated in a bewildering array of studies that have explored both its narrow psychological meaning and its broader social implications. In this volume, authors John P. Kirscht and Ronald C. Dillehay have provided a much-needed review of this growing subject, summarizing and evaluating about 260 studies that have appeared to date.

Kirscht and Dillehay differentiate between the psychological and the sociological approach to authoritarianism, tracing the historical development of both schools of thought. They also outline three major views of authoritarianism: as antecedent to certain types of behavior (for example, ethnic prejudice), as the consequence of other variables (such as child rearing practices), or as a correlate of yet other processes(e.g. alienation); these views, in turn, suggest a variety of theoretical and methodological issues. The authors review, in addition, the multitudes of beliefs and behaviors thought to vary with authoritarianism, examining the validity of these relationships in empirical research.

While the authors do not attempt to reformulate or redefine authoritarianism, they point up avenues for future research and single out significant research findings which are likely to offer the firmest ground for development.