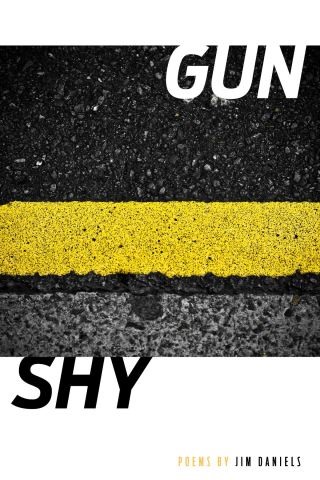 The poems in Gun/Shy deal with the emotional weight of making do. Tinged with both the regrets and wisdom of aging, Jim Daniels’s poems measure the wages of love in a changing world with its vanishing currency. He explores the effects of family work—putting children to bed, leading parents to their final resting places—and what is lost and gained in those exertions. Childhood and adolescence are examined, through both looking back on his own childhood and on that of his children. While his personal death count rises, Daniels reflects on his own mortality. He finds solace in small miracles—his mother stretching the budget to feed five children with "hamburger surprise" and potato skins, his children collecting stones and crabapples as if they were gold coins. Daniels, as he always has, carries the anchor of Detroit with him, the weight both a comfort and a burden. He explores race, white privilege, and factory work. Eight Mile Road, a fraught border, pulses with division, and the echoes of music, singing through Detroit’s soiled but solid heart, resonate in these poems. His first long poem in many years, "Gun/Shy," centers the book. Through the personas of several characters, Daniels dives into America’s gun culture and the violent gulf between the fearful and the feared. Throughout, he seeks connection in likely and unlikely places: a river rising after spring rain and searchlights crossing the night sky. Comets and cloudy skies. Cement ponds and the Garden of Eden. Adolescence and death. Wounds physical and psychic. Disguises and more disguises. These are the myths we memorize to help us sleep at night, those that keep us awake and trembling. Daniels’s accessible language, subtlety, and deftness make this collection one that belongs on every poetry reader’s shelf.

Jim Daniels: A native of Detroit, Jim Daniels currently lives in Pittsburgh and is the Thomas S. Baker University Professor Emeritus at Carnegie Mellon. His recent books include Rowing Inland (Wayne State University Press, 2017) and The Perp Walk. He also coedited the anthology RESPECT: The Poetry of Detroit Music.