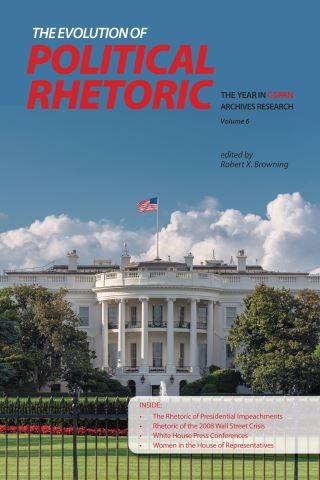 The Evolution of Political Rhetoric

Volume 6 of The Year in C-SPAN Archives Research series focuses on the rapidly changing rhetoric coloring American politics. An increasingly polarized electorate combined with advances in technology have led to a combative and pitched rhetoric through more and more outlets. Each chapter is interdisciplinary in nature, drawing on communication studies, political science, history, and other fields.

Using the extensive collection of the C-SPAN Video Library, chapters cover the highly visible Thomas and Kavanaugh judicial nomination hearings as well as the ongoing debate around impeachment. Other pieces focus on the rhetoric of the 2008 Wall Street crisis, presidential campaign announcements, White House press conferences, floor time by women in the House of Representatives, the use of Twitter by legislators, and the puzzle of zero population growth. Collectively, they paint a picture of how Congress and the president approach the broad topic of political rhetoric using C-SPAN video as the basis for their research.

The C-SPAN Video Library is unique because there is no other research collection that is based on video research of contemporary politics. Methodologically distinctive, much of the research uses new techniques to analyze video, text, and spoken words of political leaders. No other book examines such a wide range of topics—from immigration to climate change to race relations—using video as the basis for research.